What to Know About Falsework 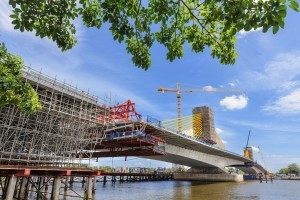 With any large construction project, there are multiple stages where the structure isn't ready to support itself.

That's where falsework comes in. Similar to a parent's job with their child, falsework's job is to provide support until the structure can be supported on its own.

What else is important to know about falsework's role in construction? Keep reading to learn more.

1. It is Different Than Formwork!

First off, falsework is not synonymous with formwork! While both of these structures play similar roles in construction, they have key differences to be aware of.

First, let's just define what it is we are talking about. Falsework is defined as any construction used to support vertical loads for another structure until it becomes self-supporting. It is commonly used when supporting girders or arch bridges.

If falsework's job is to support, then formwork’s job is to mold. Formwork holds the concrete in place until it hardens to the desired shape.

The concepts are similar, but it is critical to use the terminology correctly to avoid confusion.

There are various types of falsework components in the market, some that are marketed as systems by different manufacturers. Some systems use aluminum frames and leg assembly. Other systems will utilize props made of steel, while others will simply incorporate wood.

Typically, you will encounter a combination of systems and random components as part of a complete falsework assembly on a job-site. One such example would be a shoring tower for bridge girders. These can contain a mix of steel, aluminum, and wood components for one single tower.

This is not a typo – we do indeed mean centring and not “centering”. This term is commonly used in architectural terms to describe the support of arches during construction.

During construction, arches and domes are unstable until the keystone is inserted at the top of the arch. Centring works to support and hold up the arch until it is completed and able to support itself.

4. It Can Be Used with New and Old Structures

The way we have referred to falsework's role so far makes it seem like it is only used with new projects or the construction of new structures. While it is most commonly used in these circumstances, it is possible to use it with existing structures as well.

Falsework can be used as a temporary support for structures that have been damaged, that were left incomplete, or for overloaded structures that are past their service life.

Older buildings might need this kind of temporary support for several reasons. It could have been damaged after years of use or even from natural disasters and need to be rebuilt. Or it could just be breaking down and need to be repaired, like old historical buildings for example. Another common use is for brick facade retention during the remodeling of a buildings interior.

Stress and pressure aren't just things you feel during a big construction project; the building or bridge is feeling pressure well! Falsework provides support and takes on the loads and stresses so that your structure will be supported even when it can't support itself.

We mentioned that the design and implementation of this type of support can be difficult, and many factors must be considered. It is always recommended to get a qualified engineer involved when supporting these large structures, and DHG’s team of falsework engineers is happy to help. Contact us today to learn more about our falsework design services.