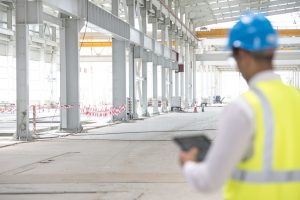 Second, there is the establishment of the seismic demand used in the analysis of the building. Statistical analysis is used to determine the probability of the maximum considered earthquake (MCE) occurring at the building site at any given time. The MCE demand level varies based on the time frame considered and the probability that there will be ground motion at the site that exceeds the MCE (i.e. 5% probability of exceedance in 50 years). Together with these two variables the mean return period of an earthquake can be established (i.e. it can be expected that an earthquake of ‘X’ magnitude, or the MCE, will occur approximately at least every 975 years).

In conventional structural analysis and design, the seismic demand used for the design of the seismic force resisting system is reduced by a system-wide Response Modification Factor, R. This coefficient is established based on the ductility of the lateral system selected for design. The R-Factor is intended to act as a representation of the ability of the lateral system to dissipate energy as it flexes, bends, and undergoes inelastic deformation under seismic load.

In the evaluation of existing buildings, the concept of reducing the demand to account for ductility in a system is captured by using component specific m-factors. Rather than reducing the seismic demand, m-factors are applied to scale up the strength or capacity of individual structural elements that experience ductile or “Deformation Controlled” failure. These m-factors vary by component and allow the design professional to apply a uniform seismic demand to the system while modifying the strength of each individual element of the system according to its ductility. This philosophy is ideal for seismic retrofits that require the introduction of an entirely new lateral system or the strengthening of only a few discrete components.

See what Blake Roskelley has to say about construction engineering and the scaffolding industry.