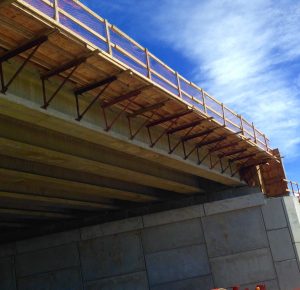 The proper design of bridge overhang brackets and related falsework is critical. Failure to properly design this falsework can result in partial collapse of the formwork/falsework, damage to the bridge structure and damage to equipment.

Falsework is typically anchored to bridge girders by either cast in place steel anchors or by using a cast in place sleeve that allows the use of a threaded rod or coil rod. These anchors can then be fastened to the overhang bracket itself.

Cast in place anchors for bridge formwork is available by many suppliers. Some critical things to consider is where the anchor is placed. In box beams for instance, the thickness of the concrete along the top of the box beam may limit the capacity of the anchor. If the capacity of the anchor is limited, then the spacing of the brackets will need to be reduced, resulting in increased costs of equipment and labor. For Bulb Tee beams care also needs to be used when deciding where to place either cast in place anchors or tubular inserts. If cast in place anchors are used, they are typically placed on the edge of the top flange. If the top flange is too thin, then the flange of the girder may be the weak link in the system. Where tubular inserts are used the strength of the girder is less of a concern. When using tubular inserts, a special bracket (typically a steel angle) is required to allow the nuts for the inserted rod to bear properly and prevent bending of the rod.

Supports between the overhang brackets can be made of almost any material. Typically lumber 4x4’s or aluminum beams are used. Additional supports are required under the screed form and may be much larger than the typical supports. The support beams under the concrete deck typically have a tighter spacing than for the walkway.

Where very large screed equipment is used, the equipment typically has a set of multiple wheels. Analysis of the supporting beams for the screed load is a complicated task. Analysis of the multiple screed wheels on a multiple span beam at multiple locations along the beam is required to determine the maximum shear, bending and reaction forces.

On occasion, high winds can cause major damage to the falsework. Wind uplift forces have in the past resulted in the falsework being lifted up and over the edge of the bridge resulting in construction delays and equipment damage. Entire girders may need to be replaced if cast in place anchors were used. To prevent this type of problem multiple methods for holding down the falsework can be used. Brackets can be held down with sandbags, tied with wire to concrete blocks/road barriers or can be anchored to the girders themselves (if allowed).

See what John Hizer has to say about construction engineering and the scaffolding industry.