Is a Mast Climber a Scaffold? 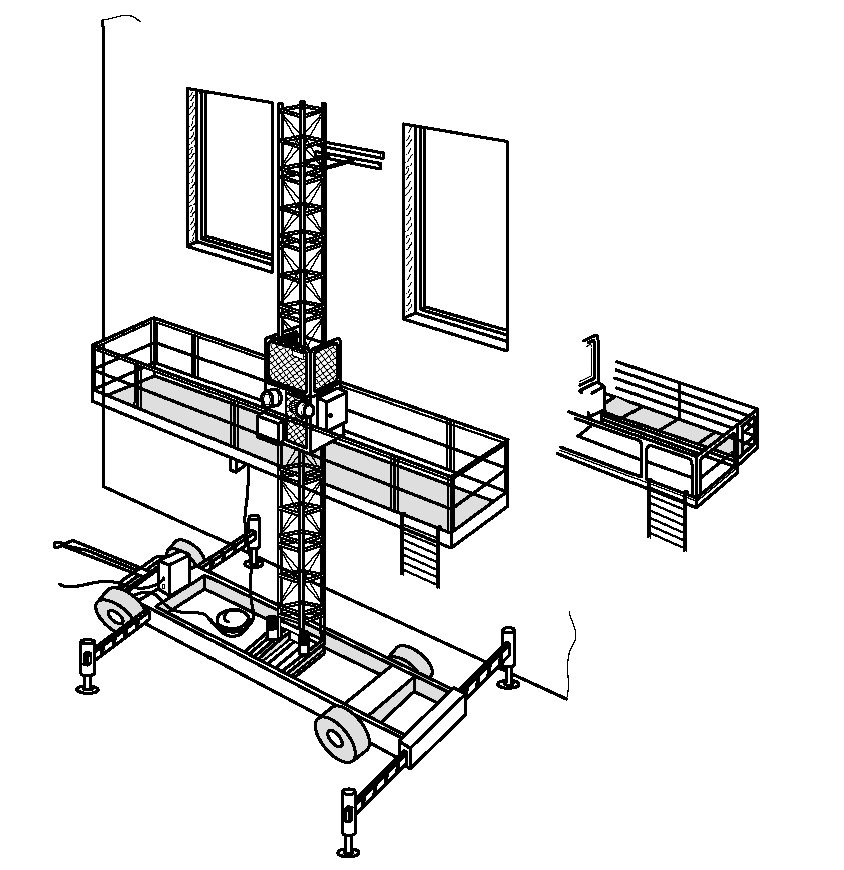 Is a mast-climbing work platform a scaffold? This is a common question due to conflicting information provided by OSHA. The quick answer to the question is yes, but determining the applicability of OSHA standards for mast climbers requires a bit of research, a real understanding of what a mast climber is, and common sense.

While developing the revised scaffold standards that went into effect in 1996, the evidence indicates that federal OSHA determined that aerial work platforms, as described in the ANSI A92.2-1969 standard, are in fact scaffolds.

The original 1971 OSHA standards placed the aerial work platform regulations in Subpart N, Cranes and Derricks. However, the SAIA pointed out that since OSHA determined that aerial work platforms are scaffolds, the aerial work platform standards should be included in the revised scaffold standards. OSHA agreed and placed the aerial lift standards in a new section recognizing that aerial lifts were a unique type of scaffold. The Scaffold Standards Scope and Application, 29 CFR 1926.450(a) states: “The criteria for aerial lifts are set out exclusively in 1926.453 of this subpart.”  This is also stated at the beginning of the Scaffold General Requirements, 29 CFR 1926.451: “This section does not apply to aerial lifts, the criteria for which are set out exclusively in §1926.453.”

In addition, it is acknowledged in the preamble to the 1996 revised scaffold standard that: “OSHA recognizes that the A92 committee has updated A92.2-1969 and has adopted other A92 standards which address technological advances and evolving safe industry practices regarding elevating and rotating work platforms. The Agency has determined that compliance with the pertinent A92 standards adopted by ANSI since 1969 will provide employee safety at least equivalent to that attained through compliance with ANSI A92.2-1969.”  This opinion was restated in a note to § 1926.453 (found at the end of section 1926.453): “Non-mandatory Appendix C lists examples of national consensus standards that are considered to provide employee protection equivalent to that provided through the application of ANSI A92.2-1969, where appropriate.”  Simply stated, if you comply with the ANSI standards, OSHA will recognize that you are working safely, and you will be in compliance with 29 CFR 1926.453.

If you are using a mast climber and complying with the requirements of the specific ANSI A92.9 standard for mast-climbing work platforms the assumption is that your company is in compliance with the OSHA standards because of OSHA’s note concerning mast-climbing work platforms in the mandatory standard, 1926.453.  Furthermore, A92.9 is listed in Non-Mandatory Appendix C of the OSHA scaffold standard and included in OSHA’s note.

Sounds easy, right? Not so fast.

On Aug. 1, 2000, OSHA issued a Letter of Interpretation arguing that scissor lifts are not aerial work platforms but are Mobile Scaffolds, a concept that is based on the fact that scissor lifts were not included in the A92.2-1969 standard; this is a theory that conflicts with the industry’s understanding and categorization of scissor lifts as an aerial lift demonstrated in the ANSI A92.6 Self-Propelled Elevating Work Platforms standard.

It then follows that since mast climbers, like scissor lifts, are not listed in A92.2-1969, and using OSHA’s flawed logic, mast climbers are not aerial lifts and must comply with the scaffold regulations in 29 CFR 1926.451 and 452.  While this is a ridiculous proposition, and contrary to the statements in the Scope and Application of the scaffold standard, let’s see what happens when applying an alleged applicable OSHA standard.

First, which OSHA regulations apply? Using Figure 1 as an example, you can see that there are wheels and a mast; perhaps it can be considered to be a Mobile Scaffold.  One OSHA Mobile Scaffold standard requires that “platforms shall not extend outward beyond the base supports of the scaffold.”  Note the platform extensions in Figure 1—looks like we have a problem! How about the requirement that “caster stems and wheel stems shall be pinned or otherwise secured in scaffold legs”? This doesn’t seem to work so well either

Now consider this mast climber to be a regular Supported Scaffold, rather than a Mobile Scaffold. Perhaps these standards are a lot easier to use. These regulations require that the scaffold has to be tied to the adjacent structure at each end and every 30 feet in between. Since there is only one mast, that would mean at each corner. Vertically, a tie isn’t needed until the mast is four times higher than the minimum width.  This typically does not conform to the manufacturers’ requirements and will probably result in mast failure.  Without belaboring the situation, you can see there are problems attempting to apply non relevant standards.

The solution is obvious, simple and has already been addressed by OSHA in § 1926.453. Since OSHA’s note in § 1926.453 accepts the ANSI standards as applicable and acceptable standards, not only will you be safe, you will also be in compliance with the OSHA standards assuming you apply the appropriate ANSI standard.  It’s as easy as that!  If anybody tells you differently, they are wrong:  Refer them to A92.9 and tell them to carefully read the note at the end of § 1926.453.  If you don’t have the applicable ANSI A92 standard, download a copy from www.saiaonline.com for a nominal fee.