Goals and Other Nonsense

SAFETY IS MY GOAL

Have you ever noticed the bumper sticker on the pick up truck that roars by you at 20 miles over the limit?  It says “Safety is my Goal.”  Does that make sense to you?  Kicking the football between the goal posts is a goal.  Leaving a jobsite without injury is a goal.  But watch out for the guy who says: “Safety is my goal.”  To me that suggests that he plans on getting safe some day but he just hasn’t gotten there yet!  Furthermore, how do you obtain safety?  Do you buy it at the home improvement center on aisle 3 between the paint and toilets?  Or maybe you can get it from the local scaffold supplier who has some extra safety lying around.

I think not.  Safety isn’t a goal but rather a process.  In the case of safety, the process is ensuring that the actions of people provide the result of no injuries or death.  So, in the case of the speeding truck driver, while he is presumably encouraging safety by slapping a bumper sticker declaring his concern, his actions suggest otherwise.  And so it is on the jobsite.  If safety is the goal and not the process, stay away.  Safety should be a way of working that results in a healthy safe environment.  The process produces the result, and without the process you will never get the result.  Think about it.

How often have you heard of this one?  I want some of those OSHA approved plank.  You can only have OSHA approved scaffold in this plant.  Yeah, right.  In scaffolding, OSHA doesn’t approve anything.  That’s not their job.  It’s your job to make sure you are in compliance with OSHA standards.  In scaffolding, this means you have to understand your equipment, your regulations, and how you work.  There is no substitute and there is no way around it.  Another claim close to this is the one that says this product “complies with all applicable OSHA standards.”  This actually is an accurate statement, for the manufacturer.  In the case of scaffolding, the user is the one who has to ensure the product is being used safely (see above) and complies with the applicable OSHA standards.  You obviously rely on the manufacturer to provide accurate information and a safe product, but that same manufacturer cannot control how you use the product.  Therefore it is up to you.  Look at it this way: An OSHA approved plank wouldn’t prohibit you from overloading it so what good would be the approval?  Think about it.

LOOK AT THAT GUY; WHAT AN IDIOT

How often have you been on a jobsite and you see someone performing an unsafe act (that’s a polite way of saying he’s doing something stupid that will result in injury or death).  You shake your head and think to yourself: “Look at that guy-what an idiot.”  Why do you do that?  Why haven’t you stopped and talked him into stopping his unsafe act?  Be polite, don’t tell him he’s an idiot, especially if he’s bigger than you.  You just might see him do another unsafe act!  But seriously, this guy is another human being, just like you, with family and friends.  Just because you don’t know him doesn’t mean you don’t have to care.  The day everybody starts thinking about their fellow workers in a concerned way will be the day the safety process (see above) takes a great leap forward and provides a result that will be awesome.  And you don’t even have to think about that!

How Construction Engineering Can Benefit Contractors
By DH Glabe & Associates 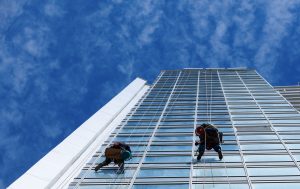