Did You Ever Wonder?

The Federal Occupational Safety and Health Administration, OSHA, was created in 1970 when the United States Congress passed a law addressing workplace injuries and deaths.  At the time, multiple rules, standards, and laws enforced by multiple agencies existed but were not consistently enforced.  For that matter they weren’t very consistent or standard either.  What was legal in one state wasn’t necessarily legal in another.  What was seen as a safe work practice in Texas just might not be safe in Illinois.  Statistics illustrated the state of affairs in 1970: Serious injuries and deaths continued to climb.  The 91st Congress took action by passing Public Law 91-596 on December 29, 1970.  This law required, in part, that employers shall:

“(1) Furnish to each of his/her employees employment and a place of employment which are free from recognized hazards that are causing or are likely to cause death or serious physical harm to his/her employees;  (2) Comply with occupational safety and health standards promulgated under this Act.”

The law also requires that employees “shall comply with occupational safety and health standards and all rules, regulations, and orders issued pursuant to this Act which are applicable to his/her own actions and conduct.”

Passing the law was the easy part since safety can sometimes be rather subjective.  What constitutes a safe place of employment?  Your idea of a safe workplace may not agree with another’s opinion.  To bring some consistency to the concept of safe workplace, the law also established an agency within the Department of Labor to develop standards that determined the minimum requirements for a safe workplace, and provide the enforcement to make the standards effective.  Thus was born the Occupational Safety and Health Administration, OSHA.  Also established at the same time was the OSHA Training Institute, OTI, to assist employers in providing training for employees.

How do you write regulations that everybody can agree on?  First, you have to be real good at writing standards.  Secondly, you have to make sure that the regulation, or standard, is applicable to the specific hazard and will not be misinterpreted.  As a matter of fact, in a perfect world, no interpretation is required and everybody agrees on the meaning of the standard and the proper application of that specific standard.  Too bad it’s not a perfect world.

Luckily, consensus standards and other rules existed prior to the establishment of OSHA.  In other words, there was a foundation on which to build a system of mandatory standards.  The American National Standards Institute, ANSI, had developed many standards prior to OSHA and for that matter, continues to develop consensus standards today.  The ANSI standards are based on earlier standards and guidelines that were developed by insurance companies going back to the turn of the last century (that’s like a hundred years ago!)  Scaffold standards can be traced back to the 1920’s when at least one insurance company issued guidelines for scaffolding and other construction activities.

Directives are another tool that OSHA uses in conjunction with the standards.  Directives are different than Letters of Interpretation. The purpose of the Enforcement Directive for Scaffolds, for example, is to give guidance to OSHA compliance officers for enforcing the scaffold standards.  This directive is useful information and, just like the Letters of Interpretation, is available on the OSHA website, www.OSHA.gov.

So, is it a wonder that the OSHA scaffold standards are applicable to many scaffolds?  Not really, once you realize that many people with a lot of expertise have been involved in the development of standards over the years and still are today.  The Scaffold Industry Association, SIA, has been intensely involved in the development of many scaffold related standards since the association’s inception.  Mr. Jerry Towse, first president of the SIA, recalls:  “We (the SIA) were concerned when the first OSHA scaffold standards were issued because they inadequately addressed the industry’s concerns about safety.  At that time, it was decided the association should be proactive in standard development.”   This involvement includes the ANSI aerial lift standards, (the A92 series of standards), the ANSI scaffold standards, (A10.8), and the present OSHA standards.  Like the SIA, the Scaffolding, Shoring, and Forming Institute, SSFI, has also been involved with scaffold standards since that association’s creation in 1960.

You may think the OSHA standards are deficient but I suggest this:  try writing a standard or two.  You’ll find out how hard it is to be precise yet broad enough to apply universally.  You should be thankful to all the involved people who have selfishly contributed to the process.

s�_ae� (�  For Tubular Welded Frame Scaffolds, for example, these are the differences: 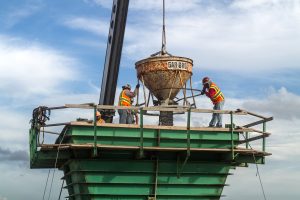 The Basics of Structural Formwork
By David H. Glabe, P.E.

Where Did The Shoring Go?
By David H. Glabe, P.E.