Once upon a time, long, long ago, there was a federal agency that developed a set of regulations governing scaffold access.  These regulations were thought to be perfect, or about as perfect as regulations could be.  The scaffold industry was invited to comment on these regulations.  In fact, the whole country was invited to comment on those regulations.  Many came forward to express an opinion.  Contractors, suppliers, manufacturers, wise safety experts, academia, industrialists and regular citizens, expressed their opinions to the agency responsible for the promulgation of the scaffold standards.  Undeterred my the daunting task before them, stalwart governmental employees sifted through the input, inputted the input where reasonable, and finalized the regulations, or standards, that we now know as the scaffold standards.

Included in the standards are regulations governing access for scaffolds.  A number of access options are available to the scaffold erector and user, including stairways, ladders and direct access.  Ladder usage includes portable ladders, such as extension ladders, and attachable ladders, also known as clamp-on ladders.  Now, one would think that clamping a ladder on a scaffold would be straight forward.  Frankly, what possibly could go wrong.  You clamp the ladder on the scaffold, make sure the first step is no more than 24 inches (there’s a regulation that says the first step can be no more than 24 inches – that’s reasonable) run the ladder up to the top of the top platform, and be done with it.  What could be easier?  Well, it appears that the industry has managed to make a simple matter about as difficult as can be imagined.

For starters, there’s the issue of the first step.  What’s with that?  What isn’t to understand about 24 inches?  Most clamp on ladders have a rung spacing of 12 inches.  That would put the first rung at 12 inches, which, amazingly, is less than 24 inches.  One would think that this isn’t an issue.  If your ladder doesn’t fit this scheme, get a different ladder.

Should the worker be forced to get off the ladder at certain intervals?  Good question.  Present regulations allow the ladder to extend straight up the full height of the scaffold, not forcing the user to get off at intermediate stops.  Is this good?  The scaffold designer gets to call the shot on this one.  While the regulations do not require ladder climbers to take a rest, the regulations do require rest platforms at least every 35 feet vertically, should the climber need it.  Forcing the user to use the platform is a decision of the scaffold designer.

Next, the issue of ladder frequency is presented.  How many ladders should we have for a scaffold.  Cleverly, the OSHA standards do not address this issue.  Guess what.  You get to figure it out.  If your scaffold has only one ladder, you have 50 workers on the scaffold, and they have to walk a quarter mile to get to the ladder, you may want to reconsider your strategy!  Should not common sense prevail?  If the workers are tempted to climb the runners because it’s too far to walk to the ladder, then another ladder would be in the best interest of the workers.

The top of the ladder draws a lot of attention from safety minded folks, as well it should.  I’d hate to have the ladder a couple rungs short of a full ladder if I were climbing it.  Interestingly enough, everybody seems to be fixated on a three foot extension of the ladder above the top platform but many seem to be confused as to why.  For that matter, they wonder where the 3 foot dimension comes from, as well they should, since there is no mention of it in the scaffold standards.  No magic here; you need to have something to hang onto as you climb off the ladder onto the top platform.  It doesn’t have to be the ladder although it’s pretty handy.  It can be other things like grab irons and guardrails.  Since it’s easy to run the ladder to the top of the guardrail on many scaffolds, why not do it?

If there is anything controversial with attachable ladders is the issue of accessing the platform.  Is it permissible to climb over or through the guardrail system or is required to have access gates.  This may be the only legitimate question concerning the installation and use of attachable ladders.  I believe the answer is up to the designer of the scaffold.  Federal OSHA does allow climbing over or through the guardrail system.  Scaffold manufacturers have a variety of access devices available for frame, system, and modular scaffolds.  Certain installations do not readily lend themselves to the use of these products; thus the policy of OSHA is a correct one.  It is the scaffold designer that determines the applicability of access gates.

See, this is straightforward.  All scaffold platforms must have proper access.  This access can be an attachable ladder.  The maximum first step shall be no more than 24 inches.  Rest platforms shall be  provided at least every 35 feet vertically.  The ladder can be a straight shot for its full height, although this isn’t recommended, particularly on very tall scaffolds. 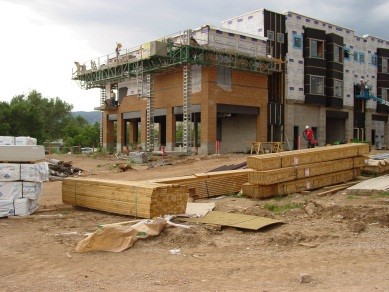